President Joe Biden walks through the Rose Garden of the White House, Tuesday, Aug. 3, 2021, on his way to deliver remarks on COVID-19. (Official White House Photo by Adam Schultz)

LewRockwell.com reports that Joe Biden’s declared vaccine mandate is becoming “more pointless every day.” Biden’s mandate was declared three weeks ago, but has gone almost nowhere in its implementation. Everyone from federal contractors to postal workers to state employees and health care workers have pushed back hard on Biden’s unilateral dictates. LewRockwell.com’s Issues & Insights column writes:

Three weeks ago, President Joe Biden told America he’d ordered his regulators to draw up “emergency” workplace rules requiring vaccinations for everyone working for big companies. Those rules have yet to emerge. And they might not emerge for another month and a half.

Meanwhile, the Biden administration announced on Friday – which is the day politicians choose to release news when they want minimal coverage – that federal contractors will have until Dec. 8 to comply with that part of his mandate. More than two months from now.

In other words, Biden hasn’t managed to get his federal mandate implemented yet, and won’t for some time. What he has managed to achieve is dissension, confusion, lawsuits, and worker shortages – as well as a steady decline in daily vaccination rates. (See the chart below.) 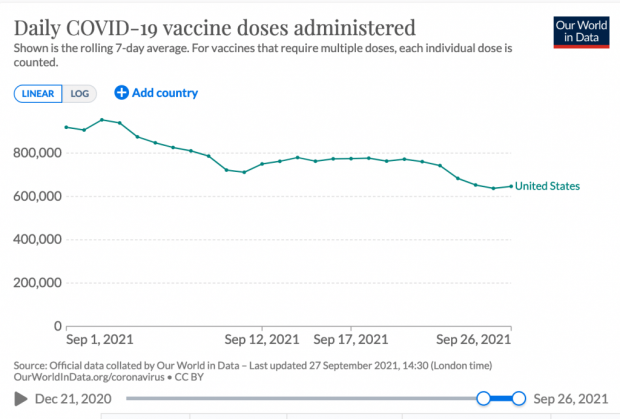 Mark it down as another Biden “success.”

Biden directed the Occupational Safety and Health Administration to create those “emergency” rules. Businesses will need them to know who can be exempted from the mandate and why, what the penalty will be for failing to comply, paperwork requirements, etc. These businesses will also need to know that they aren’t violating the Americans with Disabilities Act while enforcing the Biden vaccine mandate.

The only concrete step that the administration has taken so far was to release its “guidance” covering federal contractors. Among other things, that guidance document says that even those who’ve had COVID or tested positive for the antibodies still have to get vaccinated.

Biden’s mandate, as well as those issued by states and corporations, have sparked a raft of lawsuits.

The mandate is also threatening to cause shortages, as workers who can’t or won’t get the vaccine quit or are fired.